This is probably how Geostorm came about: at some point a year or two ago, a bunch of Warner Bros. executives were sitting in front of a dartboard marked “big American concerns,” trying to decide what their next disaster film should be about besides digital tsunamis and improbably exploding buildings. On the dartboard: terrorism, climate change, natural disasters, worldwide political conflict, the Democrats, the Republicans, Donald Trump, isolationism, globalism, hackers and identity theft, technological changes, scientific overreach, family tensions, and adorable kids getting separated from their beloved doggos. “How many darts do we throw?” asked one exec. “Eh, this seems like a lot of work,” said another, to cover up the fact that he was terrible at darts. “Let’s just cram the whole board in there and call it a day.”

Hence Geostorm, an overstuffed, comically lousy thriller that tries to worry about all these things at once, and doesn’t do a particularly convincing job of worrying about any of them. The directorial debut of Dean Devlin (co-writer of Independence Day, its incoherent sequel, and the original Stargate movie) emerges from the kind of cheerfully sloppy aesthetic that produced disaster films like 2012, Into The Storm, and San Andreas. The actual point of the film is watching CGI cities around the world get destroyed by firestorms and tornados, as the foreshadowing sets up a technologically induced worldwide storm that will devastate the entire planet. Everything else is just set dressing, a way of trying to make the stakes personal for the audience. But just as trying to keep up with every geopolitical crisis on the planet all at once can be overwhelming, trying to track Geostorm’s name-checked concerns and its barely present characters is likely to tax viewers’ attention spans. Horror movies help people process some of our worst fears, but there’s a reason most movies don’t try to address every human fear at the same time.

Gerard Butler stars as Jake Lawson, the snappish, arrogant engineer who designed and built a weather-control system in response to the rising number of natural disasters around the world. The system is commonly referred to as Dutchboy, after the fairy-tale story of a little boy who saved a Holland town by plugging a leak in a dike with his finger. Dutchboy consists of a global network of satellites surrounding the world, ready to disrupt storm systems with bombs, or employ high-energy lasers to… well, that part isn’t exactly clear. Something-something altering the conditions that let high-pressure systems form, or whatever. Point is, an international coalition of concerned countries built a giant space system that can incinerate anything on earth through a variety of means.

And yet somehow, no one ever even conceived of the idea that it might be used as a weapon. When the system somehow drops a polar vortex on a tiny town in Afghanistan and turns all the residents into dramatically fragile icicles, America attributes the problem to a system error and hides it from the world. (Which is odd, since UN soldiers discover the problem in the first place.) Then Hong Kong goes up in flames, and the US somehow covers that up as well. Turns out Dutchboy is due to be handed off from sole American control (somehow affected through a multi-country coalition on the International Space Station, one of the many plot points that makes not the faintest whiff of sense) in two weeks, and America’s president (Andy Garcia) refuses to turn over a damaged product. It’s pretty clear from the president’s first briefing exactly who’s behind the sabotage and what they want, but all the characters are ridiculously far behind the audience. It takes them a full hour into the film to even conceive that someone’s hacked and weaponized Dutchboy, and that those obliterated cities aren’t just software glitches.

Devlin and his co-writer Paul Guyot cram that first hour with characters and complications. Jake’s estranged brother Max (Jim Sturgess), a State Department official with a longstanding grudge against his cocky older brother, is put in charge of Dutchboy for political reasons. He’s dating Secret Service agent Sarah Wilson (Abbie Cornish), which they both have to keep quiet because of some kind of departmental fraternization rule. His old college buddy Cheng (Daniel Wu, now some form of climatologist in Hong Kong) gets an early whiff of the Dutchboy conspiracy, mostly so the cameras can accompany him on a frantic tear around Hong Kong, in the kind of calculated international action sequence that makes a blockbuster look friendlier to overseas audiences. Jake has a moppety daughter (Talitha Eliana Bateman), who’s mostly in the story to precociously analyze his character, then weep beautifully for the camera when he’s in danger. And when Jake arrives on the ISS to fix the problem, he meets a broadly multicultural crisis team who mostly have only the tiniest hint of story function, but at least give Geostorm a more diverse face.

All this character business takes a long and tedious time to set up, and it’s often handled in the clunky manner common to action movies that aren’t too particular about how information reaches the audience — as long as it shows up in time to frame the next set of explosions. Among the highlights: Max has far too many scenes with sassy hacker Dana (Zazie Beetz), who takes potshots at his girlfriend and spouts riveting lines like, “The user logs have been wiped clean! We have no digital fingerprints!” (She also compares a particular tempting risk to “going on a roller coaster eating Chipotle.”) Jake spends some charisma-free time fencing with the ISS chief scientist, Ute (Alexandra Maria Lara), who spends the whole movie trying to get him to take her seriously by competently proving him wrong, and still just gets a series of Butlerian smirks for her troubles. He also protagonist-splains Dutchboy’s working processes to the people who are actually running it, in an apparent bid to make himself the year’s most obnoxious protagonist. And then, a grim analysis of Dutchboy scenarios prompts the grim line, “They all end the same way… a geostorm.”

Geostorm is fundamentally devoted to making “geostorm” happen as a term, which explains why when things get critical on the ISS, a board lights up with “TIME TO GEOSTORM: 90 MINUTES,” and a friendly computer voice starts laying out the geostorm countdown. Maybe no one anticipated that Dutchboy could be weaponized, but the programmers sure as hell anticipated that they’d need themselves some kind of highly detailed, graphics-intensive geostorm warning. What they didn’t anticipate was that brothers Jake and Max would somehow find a way to get over their mutual grudges and work together, with Jake on the ISS and Max on the ground. Devlin and Guyot do bring some clever structural mechanics to the story, with twin mysteries playing out planetside and in orbit. It’s just that both play out the same way, with people staring at onscreen code and barking about their latest findings, or reminding each other of their past character conflicts before rapidly moving on. 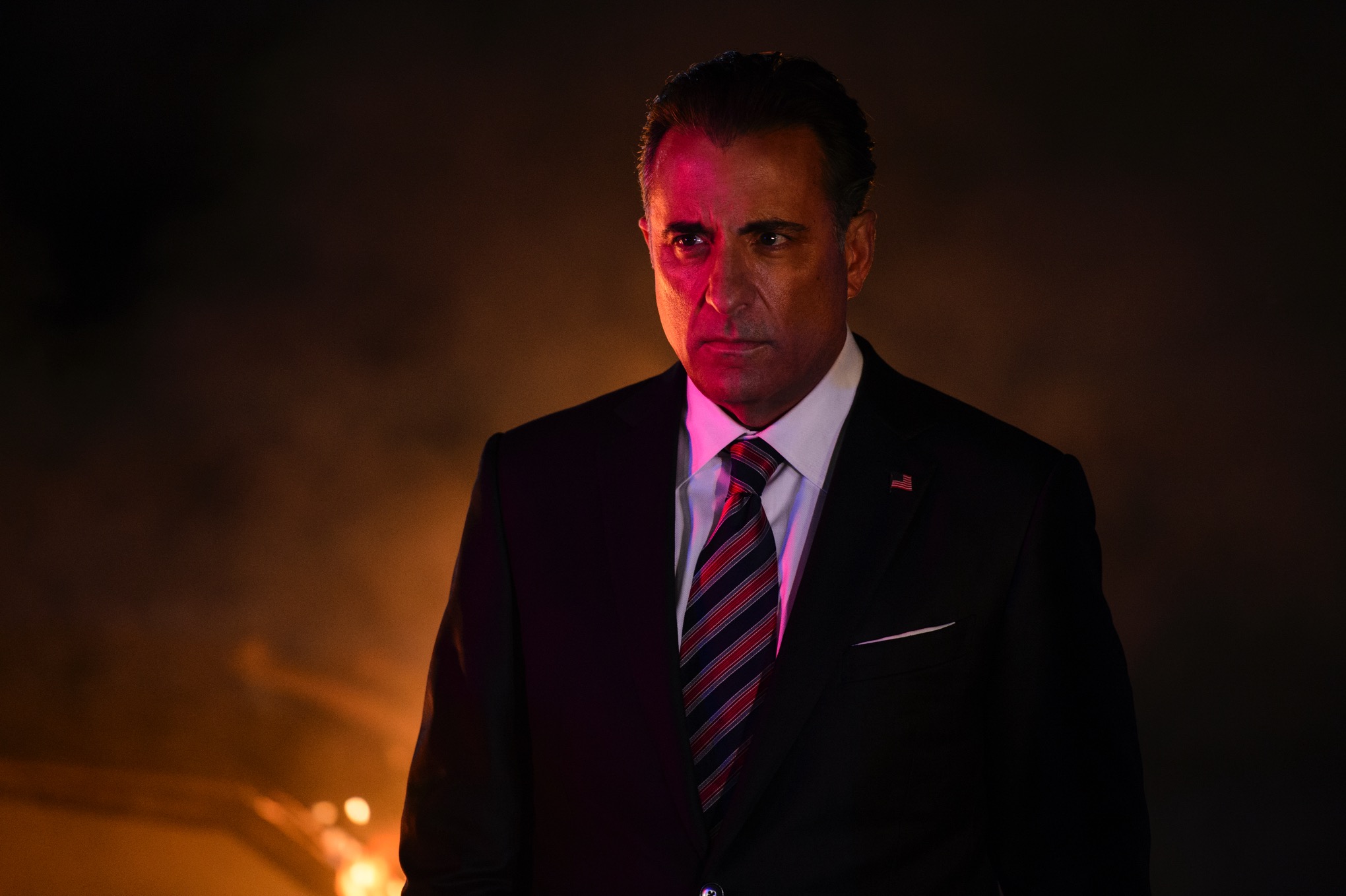 And of course, this being a disaster movie, it’s all punctuated with disasters. “C’mon, aren’t you a little bit curious to watch the world burn?” sneers one revealed villain toward the end of the film, in a line that’s mostly cribbed from Heath Ledger’s Joker. But copycatting aside, the audience almost certainly is curious to see the world burn, or at least splinter under car-sized hailstones and cold waves that chase people around Brazil, exactly like the laughably memorable “fleeing from cold” sequence in The Day After Tomorrow. For viewers who are only in it for the disaster-porn, Geostorm’s main problem is that these sequences play out too similarly, with the camera finding one “face of the catastrophe” victim to follow around as things fall apart, and then the usual glossy CGI weather tearing glossy CGI cities to shreds. The effects in Day After Tomorrow had more weight and gravitas, and were more convincing; there’s a glib feeling of frantic speed to Geostorm’s disaster sequences that make them feel a bit like the hilariously elaborate cosmic deathtraps of the Final Destination movies.

And when the final plan is revealed, it’s a pretty stupid one. “I’m turning the clock back to 1945, when America was a shining city on a hill!” another villain yells, by way of explaining what the geostorm’s catastrophes are meant to accomplish. The moment feels like a self-conscious reference to Trump’s “make America great again” speeches, and their callbacks to an era an awful lot of people wouldn’t want to relive. But Geostorm doesn’t have time to examine the impact of these kinds of politics, or even to chuckle over the irony and insanity of trying to eke some political gain out of obliterating humanity. It’s one quick shouted moment in a long frantic rush of shouted moments and only partially formed ideas about current events. Geostorm could just as well have originated with someone channel-surfing through news channels and family melodramas, getting half-glimpses of reports on terrorist attacks and political commentary. “This would probably make a pretty good movie,” that theoretical exec might have thought. “As long as it ends in… a geostorm.”